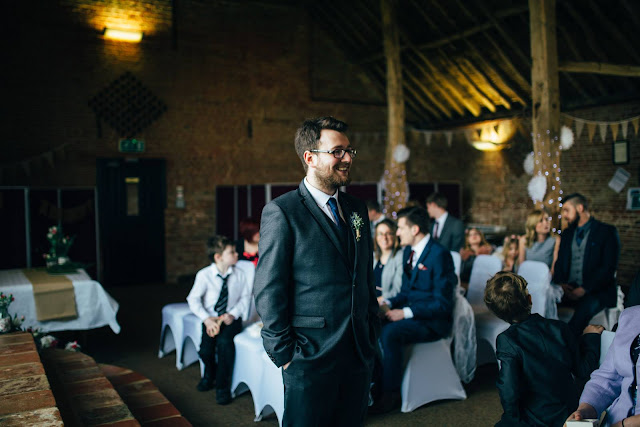 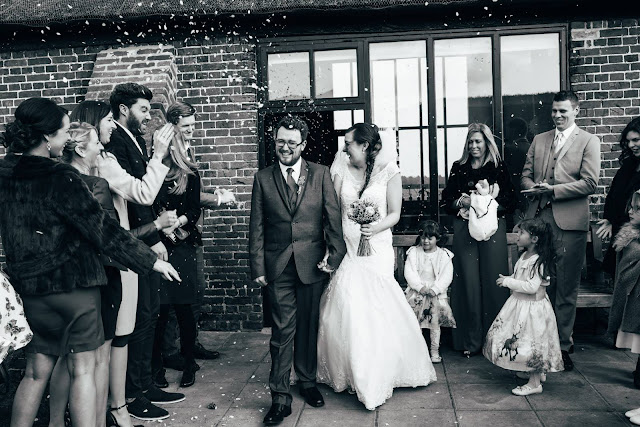 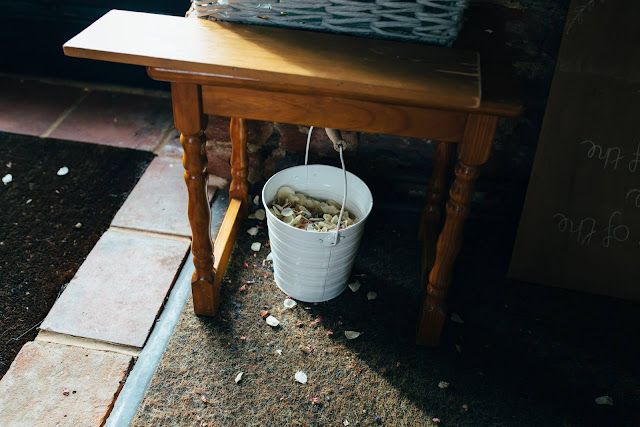 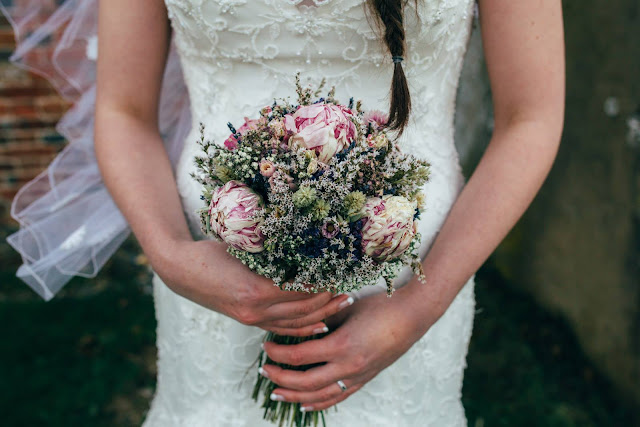 It’s the final installment of our wedding. I’ve not shared every photo as I would end up having hundreds of wedding blog posts. All that’s left is the details. Oh and food, which as hugely important.
Our venue flowers were purchased from various supermarkets the Thursday night before we got married. I think in total we spent around £65. I picked pastel coloured flowers but other than that it didn’t really matter what flowers they were.
On the Friday when we were setting the venue up we just put flowers together. No strict arrangements just what looked nice. It took around an hour in total. The jars the flowers were in were collected over the year and then decorated with floral fabric and twine. There were a few pretty bottles, they were just left as we felt the labels themselves were pretty enough.
Bouquets and buttonholes were bought from Florence & Flowers a local lady who created beautiful dried bouquets. What’s lovely is that these will keep. Such a lovely thing to be able to keep and the flowers were gorgeous. I always wanted peonies in my bouquet but getting married in February meant that I wouldn’t be able to have them fresh. But it wasn’t a problem for Carly at Florence & Flowers. I can’t recommend them enough!
We were not allowed to use paper confetti as the venue was in the countryside. So I was overjoyed when we could have natural confetti. I bought a load of eBay and put it in buckets by the door. As you can see people loved throwing it at over us.
what is vidalista silagra 100mg tadalista-fortune healthcare www.gulickhhc.com/drugs/erectile-dysfunction/ 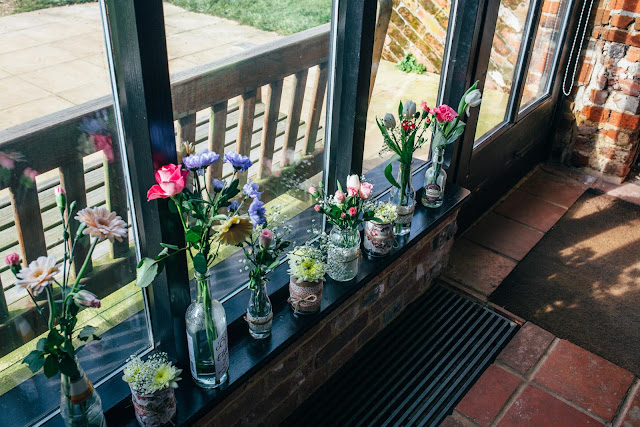 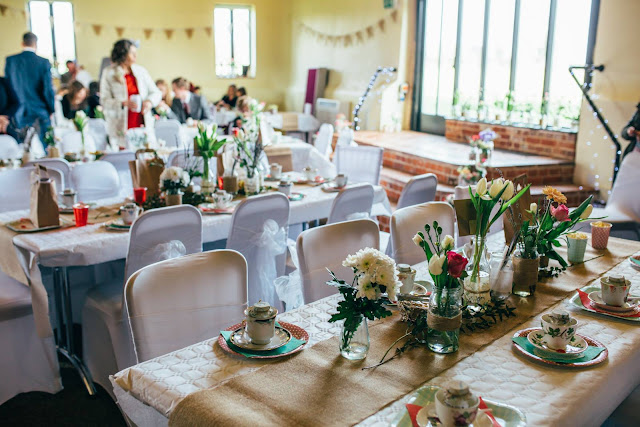 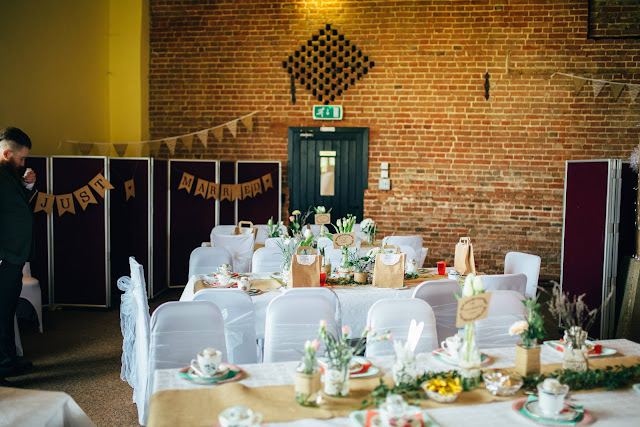 Tables were decorated with jars of flowers. Thick paper table cloths and hessian runners. I then purchased some eucalyptus from a local florist to twine around the middle of the tables. We borrowed tea cups and saucers from my friend who collected them for her wedding. The afternoon tea was served on silver platters with napkins over the top. There were blush pink and mint green plates an napkins and matching paper cups full of crisps. All of those came from our local poundland. The teacups had a favour jar inside them. Each one filled with mint imperials and then covered over with a fabric top and twine wrapped round. The jars were sandwich paste jars, thoroughly cleaned up. The tables had a glass ketchup bottle (stripped of paper) with white tulips in and the table names. 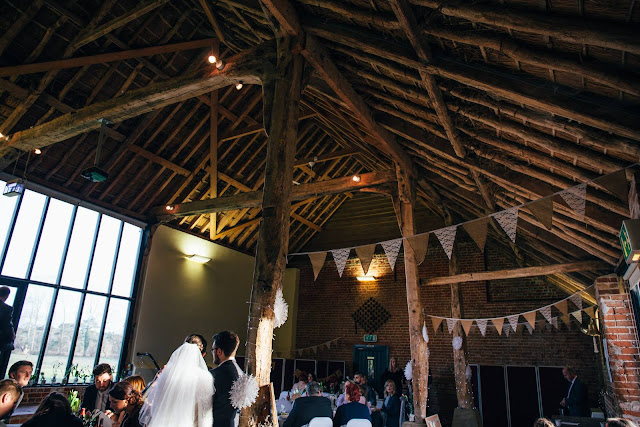 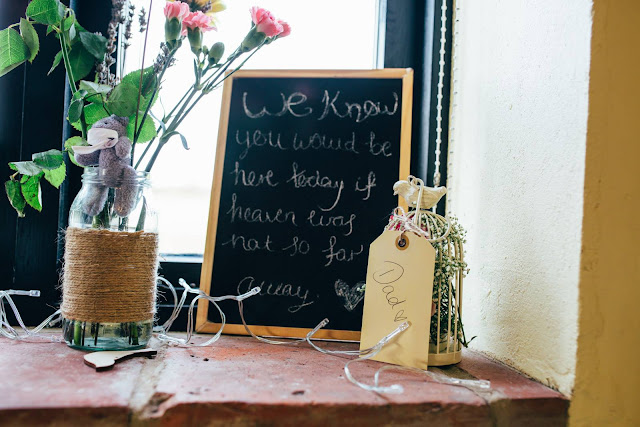 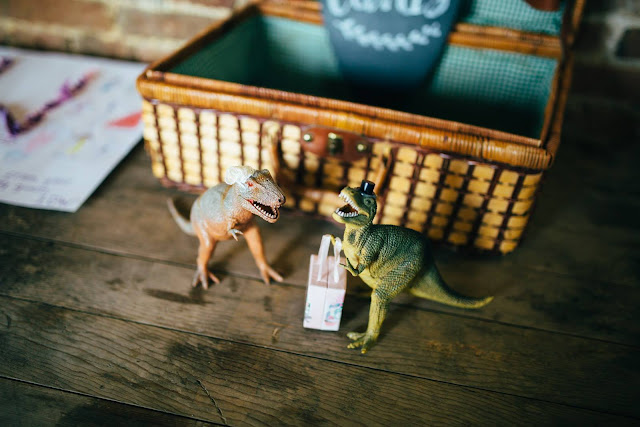 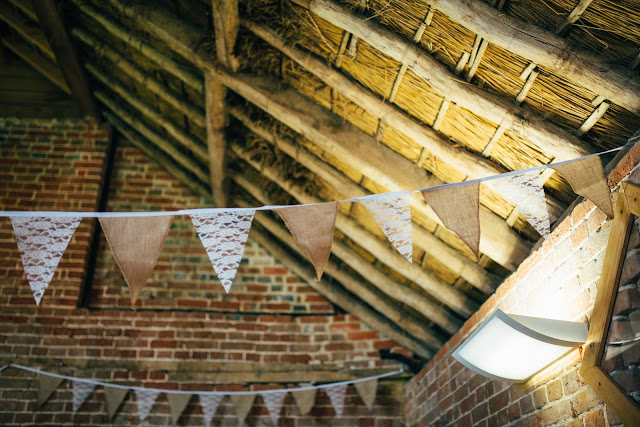 We decorated our venue with fairy lights from Amazon and hessian and lace bunting from eBay. All of which came from China. We had a few paper snowflakes left over from Christmas so they went up too.
I had a little sign on a windowsill as a little tribute to my Dad. I borrowed the birdcage from my sister. I think I gave it to her as a Christmas present!
My sister in law brought along two special guests. My nieces dinosaurs all dressed up for the wedding. It was a family joke and it was a lovely personal touch. 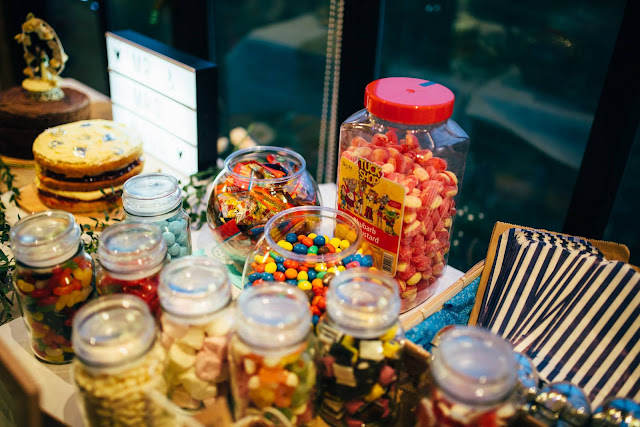 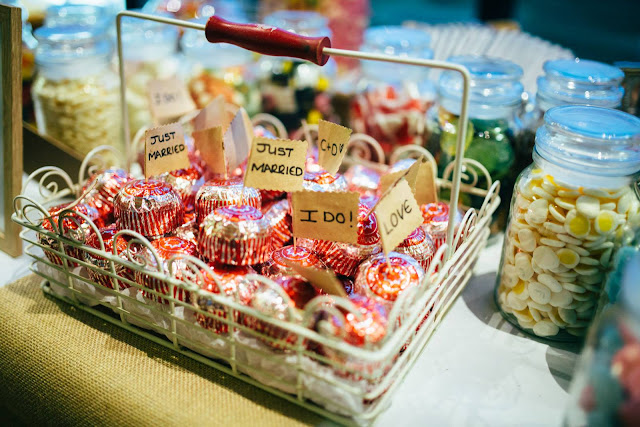 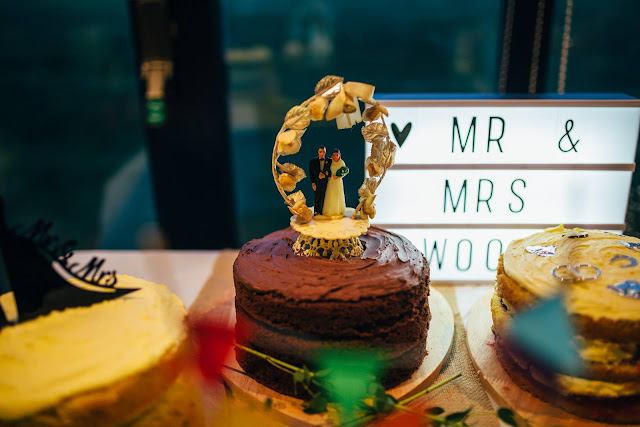 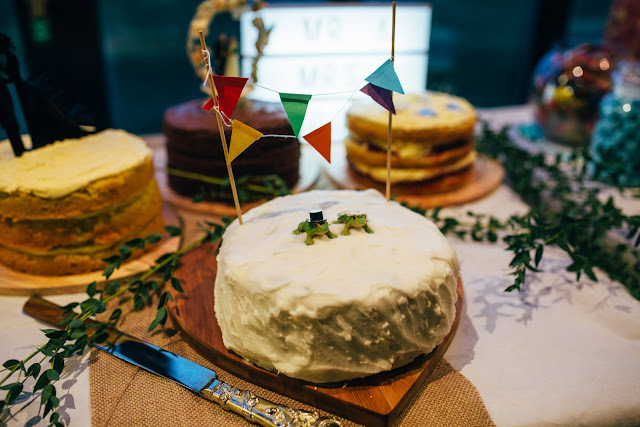 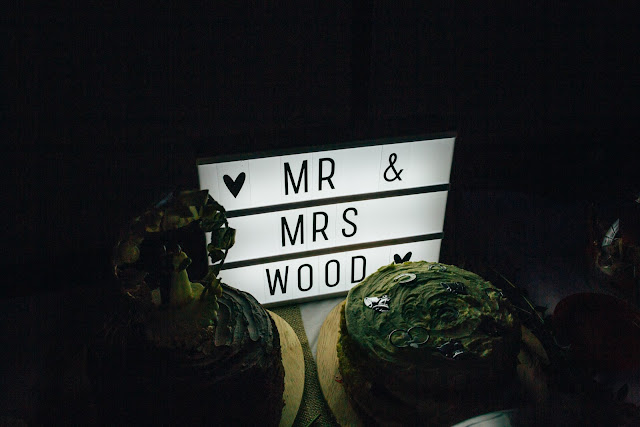 I loved our sweetie table and we still have some rhubarb and custards and rosy apples left! We bought everything ourselves. The sweets came from a wholesalers and Poundland. The M&M’s were donated from my sister-in-law. They were on a really good deal at the corner shop!
The glass jars were Douwe Egberts coffee jars. We put a call out on Facebook for jars and drank a lot of coffee so we had enough.. My mum also collected lots from the places she cleans at. In the end they would leave them out for her. We then had a few cocktail goldfish bowls from Poundland to hold even more sweets. The teacakes came from Morrisons. My husband caught ate a dodgy sandwich from their cafe and they sent a voucher as a good will gesture so that payed for them!
The sweetie bags came from eBay, as did the tongs. The scoops we borrowed from a family friend.
As for the wedding cakes. Yep that’s right. Cakes. We had four. One fruit cake that my Mum made. And then a friend made us a Victoria sponge, a lemon and a chocolate cake.  The toppers on the fruit cake were frogs. My husband likes to compare me to a frog because I have a grumpy face. So we glued a lego top hat to one and a small piece of lace to another. I loved this!!
The other toppers were my Mum’s and we had a few small bits from my sister-in-law. We also borrowed their cake knife.
I had always wanted a light box with our names and we purchased this one from Retro Kids. It’s now in Edith’s room.
I can’t even explain how much I loved our wedding and truthfully there is nothing we would change about our day. We have already decided that for our 10 year anniversary we are going to hire the venue again for a big party. Inviting the people we had share our day! I can’t wait. Only another 9 and a bit years to go!

Weddings with Kids – When the Kids Are Yours

Make Merry With Your Mother-In-Law