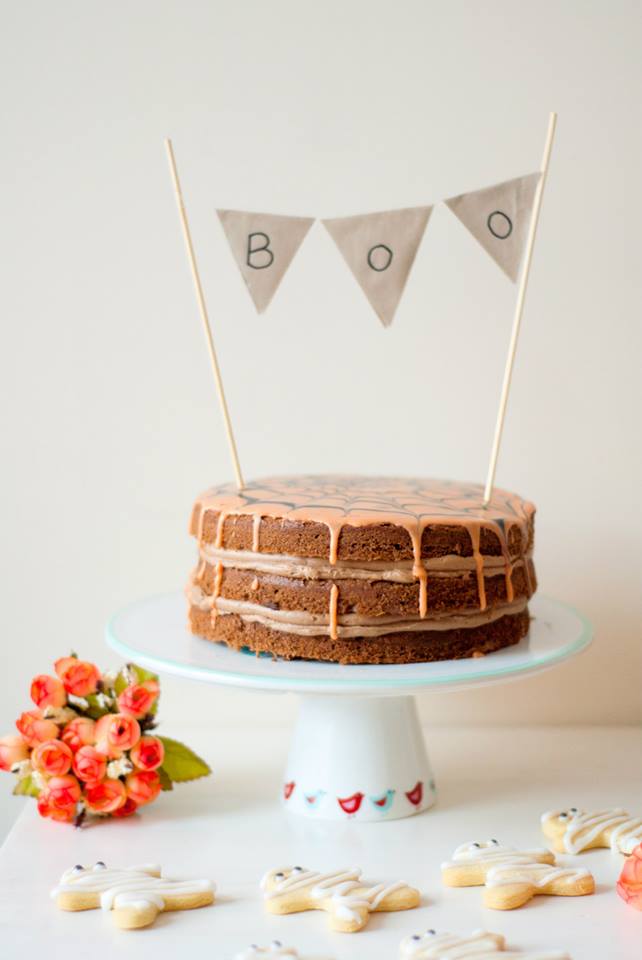 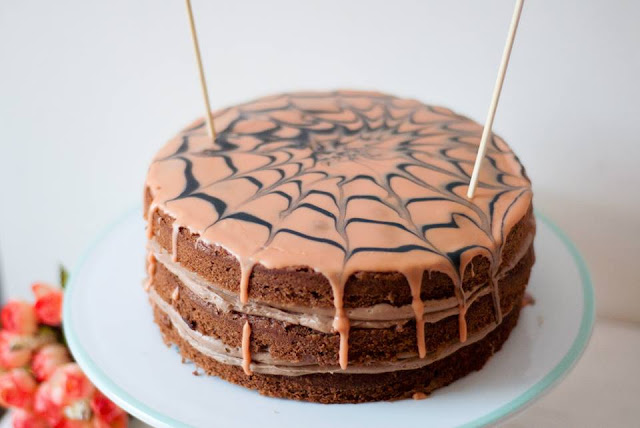 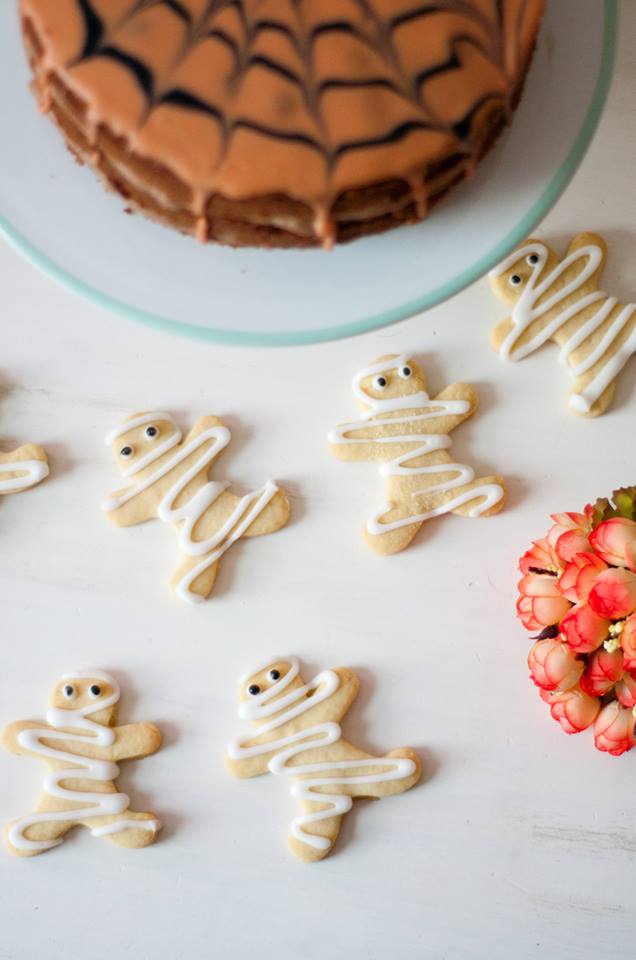 I didn’t need any excuses to make this cake but if I did? It would be the bargain of loose bottom sandwich tins from Wilkinson for a £1. Naturally I got 3. I have plans for many layer cakes.
I first made this cake two Halloweens ago. It wasn’t as nice as this version. There is something so Autumny (just made that word up!) about the chocolate orange flavour. It also helps break up the rich chocolate flavour. It’s not a Halloween cake without a bit of spider web feathering. The Halloween party on Sunday was great fun. My mum served soup in great big mugs, lots of bread, crotouns and bacon crispys to top the soup with. Then worm dogs, Halloweenies, crisps and other savoury munchies. Then shortbread, nutella topped cupcakes, white chocolate and apricot loaf and these mummy biscuits. We left in the evening feeling very stuffed but it was a great day.
I accidentally picked up a salted butter instead of unsalted for the buttercream but it added a salted caramel flavour which cut through the richness of the chocolate. Even my brother said the same thing! I think my mum has made him watch to many baking programmes.
Also a massive thank you to my sister in law who helped me with writing this recipe!
Onto the recipe. Scroll down. 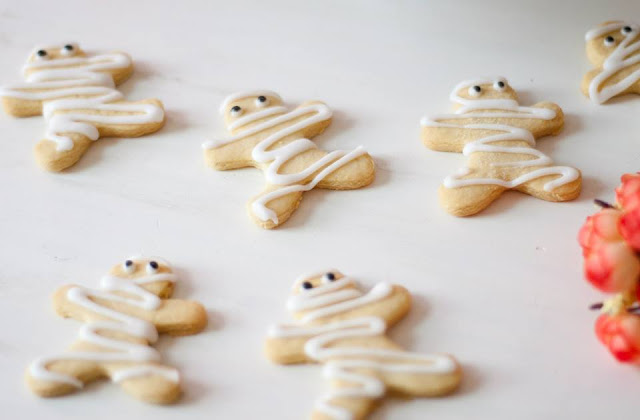 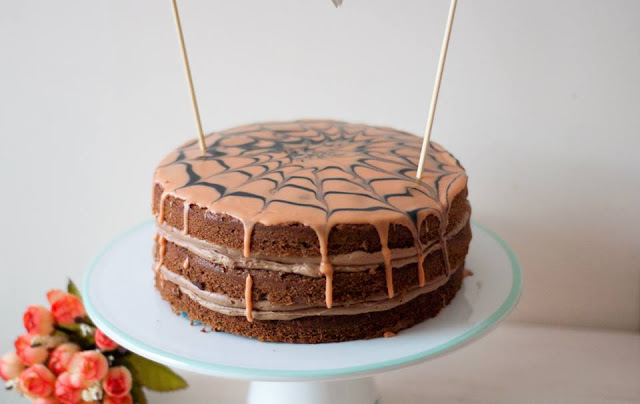 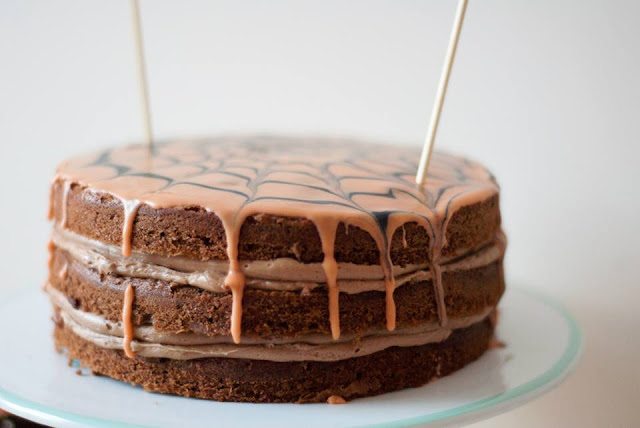 You will need:
For the cake.
250g self raising flour, sifted
250g butter
250g caster sugar
4 eggs
40g cocoa powder, sifted
1 tsp vanilla extract
1 tsp baking powder
1 orange, juice and zest
For the buttercream.
250g salted butter
200g icing sugar
25g cocoa powder
1 tbsp milk
For the icing.
200g icing sugar
black and orange food colouring
water
Preheat the oven to 180ºC/Gas 4. Grease and line 3 sandwich tins.
Beat together the butter, vanilla extract and caster sugar until light and fluffy.
Add one egg and 1/4 of flour and cocoa powder. Stir until combined. Do the same with the remaining eggs, flour and cocoa powder.
Stir in the baking powder and add the orange juice and zest.
Divide the mixture evenly into the 3 sandwich tins. And bake for 20 – 25 minutes or until a skewer inserted in the middle comes out clean.
Leave to cool completely.
For the buttercream put all the ingredients in the bowl and mix until smooth.
Spread half of the buttercream onto one of the layers. Place another layer on top and spread the other half of the buttercream onto that layer. Top with the final layer.
For the icing. Mix together 150g of icing sugar, water and orange food colouring to make a thick but spreadable icing.
Spread on top of the cake and let some of the icing drip down the sides.
Use the remaining icing sugar and black food colouring to create a pipe-able icing. Using a piping bag pipe the icing into a circle in the middle of the cake. Pipe another circle around the previous circle. You should be able to fit at least 4 circles onto the cake.
Take a knife and score lines into the cake to create the feathered effect.
Leave to set.
To create the mummy biscuits: Use gingerbread men cutters with the biscuit recipe. Decorate with eyes and pipe lines onto them to create bandages.
Happy Halloween!
0 Comment(s)
Previous Post Rays of light.
Next Post Lindt Christmas.